Type Curves or type-well curves are a foundation of reserves evaluations, development planning, production performance comparisons and completion optimization analysis. The dangers of not understanding the complexities of Type Curves, and failing to communicate how they were designed/developed, can result in large statistical variability, inconsistent information used in development decisions, and unattainable economic plans (especially in the unforgiving times of  low commodity prices). This blog series will focus on essential Type Curve considerations and analytic techniques that should be part of their development and use. The complete contents of this multi-week blog series will be presented at the upcoming SPE talk Understanding Type Curve Complexities & Analytic Techniques  on Dec. 1st, 2015. Please join us.

There are many ways to build Type Curves and they can yield significantly different results. In the example below, the left image shows six versions of a Type Curve for the same data set. The right image shows how different the cumulative revenues are for the first 12 months … showing a large enough difference to draw concern from any decision maker.

While Type-well Curves are often referred to as “Type Curves”, they are different:

Why is it important to communicate how the Type-well Curve was created?


When you’re making million dollar decisions on development plans and comparing options, you want to be sure that you understand how the Type-well Curve was created and what it is communicating. If this is not understood by your engineering team and decision makers then you could encounter issues such as:

There are several chart types used in Type-well Curve analysis. They are all based on the same production data, but each offers its own perspective on well production performance.

Cumulative Production vs Time: This chart type is useful when comparing the cumulative production at any moment in time, particularly several months after the beginning of a well’s life. It provides the quickest way to compare companies, technologies … beyond the first few months. It can also be an effective tool when considering payout as part of your analysis. 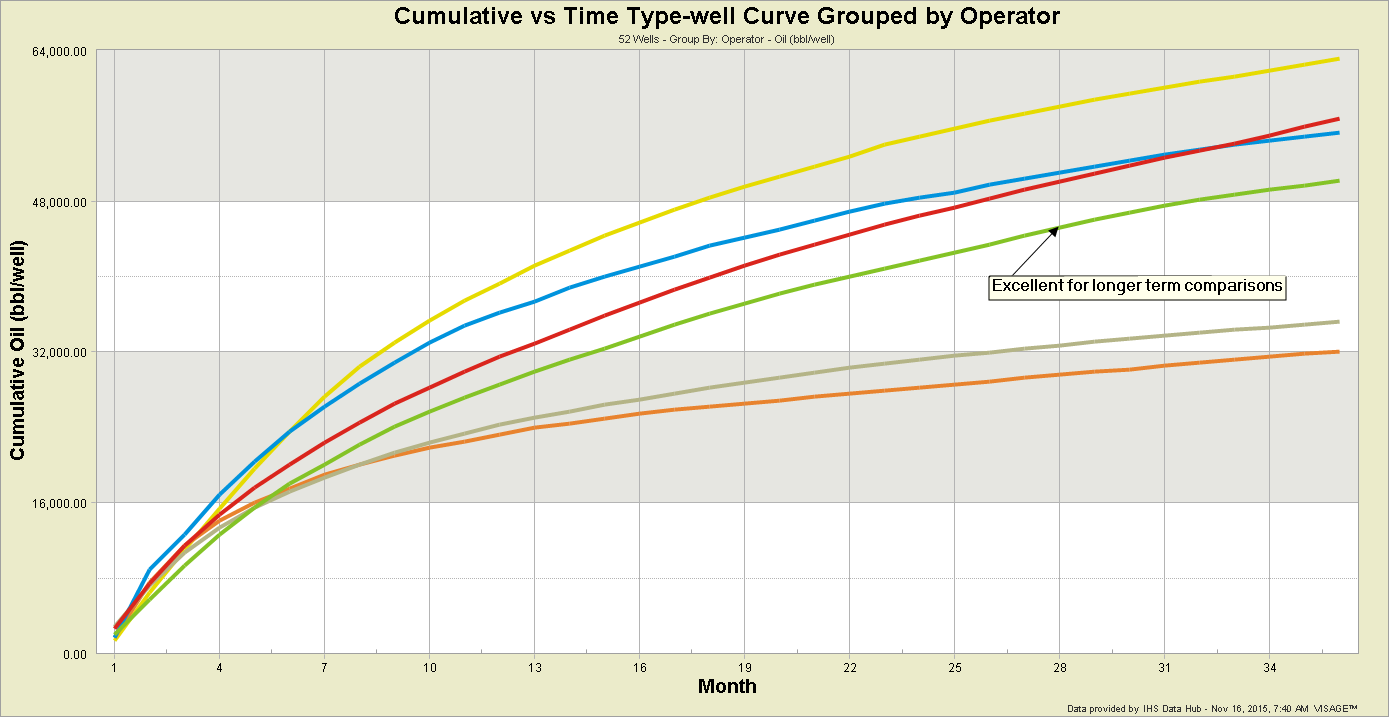 Rate vs Cumulative Production: This chart type is most commonly used by reservoir engineers. The curve provides a visual trajectory of the Estimated Ultimate Recoverable (EUR), but does not effectively communicate the time it takes to achieve a level of cumulative production.

Percentile (Cumulative Probability) Charts: This chart type is an excellent tool for understanding statistical variability. The chart types mentioned above all display a single value for a collection of wells. Percentile charts display a value for each well at a single moment in time in the form of a distribution. Common variables that are displayed are:

Probit Charts: A Probit Chart takes the same data used in a Percentile Chart and displays it using different scales. The Probit Scale, on the Y-axis, is a non-linear scale that is symmetrical around the P50. When combined with a log scale, on the X-Axis, the points of a lognormal distribution will trend towards a straight line. Applying a “Probit Best Fit” regression to the data will yield a straight line that provides a variety of statistical insights including a measure of uncertainty (P10/P90 ratio). More details about Probit Charts will be provided in a subsequent blog.

That concludes the first part of this series … sorry it was a bit long, but we needed to lay a clear foundation for the remaining topics. Additional topics that may be included in this series are: